As a working translator, my main reason for wanting to do City’s MA was to further my specialisation in legal translation. I also wanted to formalise my translation education, which had consisted of short courses and exam-based qualifications. Furthering my education in general was another motivation. Basically, I felt like going back to school.

I started the course in September 2010 and am due to finish in 2012 (I’m studying part-time). I am doing the Spanish to English language combination.

My class is happy mix of different backgrounds: experienced and less-so freelancers looking to specialise, project managers, lawyers, legal translators, linguists, and law and translation graduates, all with second-language skills in Spanish, French, English, German or Polish. Nearly all with a same goal: to become a legal translator (or to become a better one!).

In terms of progressing with the course, we were told at the beginning that, depending on our backgrounds, we would find ourselves advantaged in certain areas (i.e., practical translation, linguistics, translation theory or law), although from what I’ve seen (a little bit of observation and a lot of speculation), working translators probably have it easier, particularly (and obviously), those with legal translation experience, but also those without it. Not having to learn how to translate from scratch is a big help.

The intensive part is the 4-day blocks of classes (from 9–6, Wednesday to Saturday) at City University’s campus in London that you have to attend for each of the eight modules. You do the classes and then go home and work on the assignments you have to hand in for the module.

I have found the workload quite manageable. You normally have around a month for each assignment (one or two per module), and although they can be a lot of work, the nice thing is that you’re only ever doing one assignment at a time, which makes the course easily digestible. This is, of course, for part-time students; full-time is another story in this respect. 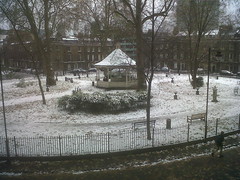 One of the two characteristics that set this Master’s apart is the face-to-face classes for distance students (the other characteristic being that the course is solely dedicated to legal translation). It can be a hassle getting yourself organised to do classes in another country or city, but it is one I have found worthwhile. I think this is especially true for translators who work alone for the majority of the time.

Let’s face it, while there are options on distance courses for interaction with classmates and lecturers, it’s just not the same as being able to put your hand up and ask away or turn to the person next to you and ask about something the lecturer has just said. And meeting up for a drink after class is not easily replicated online!

Personally, the first module was a bit of a shock, especially the first day, but I soon realised that it was a big plus to have face-to-face classes. Apart from the obvious benefits (i.e., opportunities to network, easy to ask questions, etc.), I also found it was a chance to see how the other half live in terms of translation in a university context as opposed to the real world, which was an eyeopener that has given me another perspective from which to view the sector.

One thing to keep in mind about the MA is that it’s an academic course. This means, obviously I suppose, that you have to write academic papers and do all the research and referencing that goes along with that, which can be time consuming.

More importantly though, the fact that it’s an academic course has an impact on how it is delivered. The approach is to teach you about the law, give you some translation theory, and then expect you to go away and work out how its done. As it’s a postgraduate course, I suppose the idea is for students to do a bit of critical thinking and come up with something original (a little original at least, but not too radical, as is usually the case in the academic world).

This is probably all very obvious for people coming straight from other university courses, but it’s probably worth mentioning for working translators who may have done other CPD courses or workshops. These type of vocational courses are often more content focused and give you the translations, whereas the MA’s approach is to give you the tools and let you come up with the answers. Although you do get the chance to pick the brains of your tutor in the workshops, who is generally an experienced translator who can help you with translation problems in your language pair.

Another thing about the course—that you would probably expect given its academic nature—is that the theory is an ever-present and important element. Each module focuses on an area of law (except for the first, which is on legal English and is an introduction to the course), which constitutes the bulk of class time, but there is also at least one session on translation theory.

You are required to demonstrate you know the theory and use the terminology in the annotations to your translation assignments. This being another aspect that contrasts with other types of translation courses that are more focused on the final translation.

Translation theory is not everyone’s cup of tea, and there are people on the course that loathe it. I do, however, see a point in having it as I’ve found that the theory I’ve studied on the course has had an impact on how I work, particularly with regards to terminology research, but also in other areas.

Go to City University’s website for up-to-date information. The MA in Legal Translation is a relatively new course that’s still evolving and changing from year to year, so any details given here may be out of date.